A recent newsletter from Shipwreck Beads announced their Sugar Skull contest. I wasn't sure what they were, so I looked it up. Turns out it is a skull made from sugar decorated with colored sugar designs created to honor the deceased family members on the Day of the Dead. Most years this would be a challenge I would skip, but this year it seems appropriate.
Many of the stylized versions of this theme that are depicted on t-shirts and the like feature flowers. When I searched for "Calaveras de azucar" the images were more like cake frosting flowers and ribbons in bright colors. The contest specifies that 75% of the material used be items for sale at Shipwreck, so I gathered up beads that I bought from them and made some flowers. I found a plastic skull at Kmart that was kind of creepy- I kept a sheet over it when I was working nearby. Once it was finished I really liked it, and I put it on top of my bookshelf so I will see it often.
My grandmother, Evelyn, passed at the age of 92. My interest in needle craft comes from her; many summer days were spent at her house learning to knit, do embroidery and make all sorts of wonderfully fun crafts. She also had beautiful flower gardens. It seemed fitting to make this in her memory. 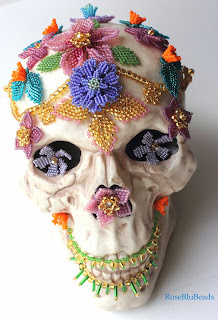 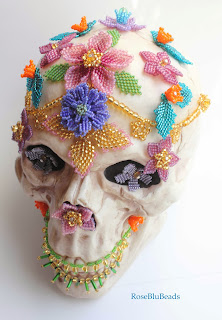 Posted by Patricia at 8:11 PM No comments:


When I first poured out a tube of Miyuki mini drop beads I was dismayed at the varied widths at the top of the bead, around the hole. It didn't matter what the color, all of them had the huge size differences. I didn't think of it at the time, but I eventually figured out a way to take advantage of the non uniform sizes.

I have a friend who is wild about berries. These raspberries were made with her in mind. I had originally been trying to make flower centers out of yellow drops, but I ended up with more of a berry. They are made with five rows of 4 beads each in tubular peyote, gathered at the end with a size 11 seed bead. For the bracts I used size 15 beads to make a simple peyote star with the stem attached. The secret is to use the drops with small tops for the first and last rows and the drops with the widest tops for the middle rows.
I was surprised I hadn't seen berries made with drops before, it seemed so logical. Then I saw the issue of Beadwork magazine for August/September and it contained instructions for berries that were similar, using drops, but the method wasn't as simple as the ones I made.

Posted by Patricia at 2:37 PM No comments:

Beaded purses were a popular pastime in the late 18th and early 19th centuries. I once owned a beautiful collection of these antique bags and was amazed to discover many had been created from kits sold through places like The Sears and Roebuck catalogs. A lot of the bags were made using knitting or crochet with beads; that is something I have not attempted. In the 1990's there was a revived interest in beaded purses, this time made into amulet bags worn as necklaces. These are a couple of the bags I made then. 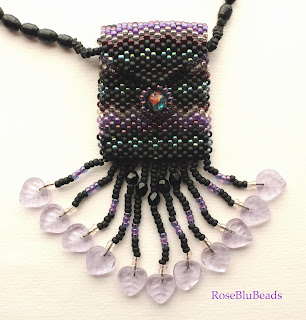 This was the first bag I made. It is the one everyone liked the best. 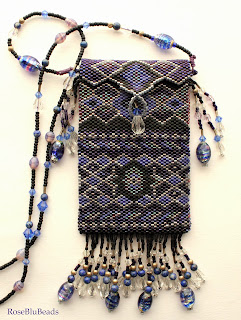 This is the first large project I made using delica beads. The bag is big enough to hold some credit cards. It is very tightly woven and that makes it almost too rigid. I beaded around a support tube when I made this and didn't realize how stiff it would be. The fringe beads include some lapis rounds and sterling silver beads. I also used Swarovski crystal and handmade German glass beads. 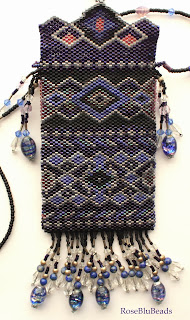 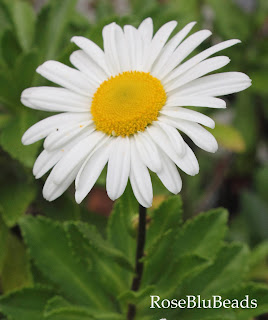 One of the only flowers left in the garden right now is the Montauk Daisy. It is a plant that I always forget about until suddenly, when the air is cold and most everything has turned brown, there it is. The flower is very much the same as the daisies that bloom in the spring, and its a nice reminder of things to come. It is a great cut flower too; it lasts a long time in a vase and brightens the dreary, rainy fall days.
To make this flower I used size 15 Toho beads in matte milk white, opaque white and white color lined crystal. The center mixes sizes 8, 11, and 15 beads in opaque yellows and a frosted transparent chartreuse. I used different kinds of peyote stitch for the petals and the center. 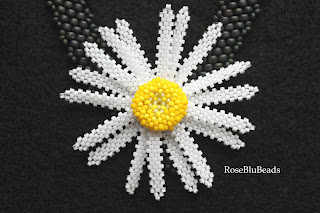 I decided to keep this necklace simple. I used the daisy in the center of a diagonal peyote woven base made out of matte metallic green beads in sizes 8 and 15.
Posted by Patricia at 12:30 PM No comments:

Alliums are one of those flowers that seem like they couldn't possibly be real. The chives growing in the garden, well ok, but the giant allium that grow 5 feet tall with 4" globe shaped blooms? And they're purple! The first time I encountered these flowers was at a rest stop in Virginia. I was amazed (and impressed by the landscaping.) I since have planted many types in my gardens, but the Allium giganteum will always be my favorite.
While trying to figure put how to use pink fringe (or tassels) in my Haute Couture necklace I was playing with my favorite colors of vintage French seed beads. That would, of course, be the pinks and purples. When I used to buy from Pierre Bovis in the 1990's he told me his family had been selling beads made in their factory in France to people living in the southwest United States since the early 1800's. At the time I was buying beads they were having difficulties with color in the pinks, especially the opaque, because the formulas they had always used contained ingredients that were being banned for industrial use. Probably lead, but maybe some gold too because the transparent pinks and purples of these beads have a luminescent quality with an inner glow that is just beautiful. It is also a permanent color; unlike so many of the Japanese beads it will not fade or rub off. The beads are not very well shaped, and the sizes vary within packages and from color to color, but sometimes that is better because you get a more organic look with the finished piece. 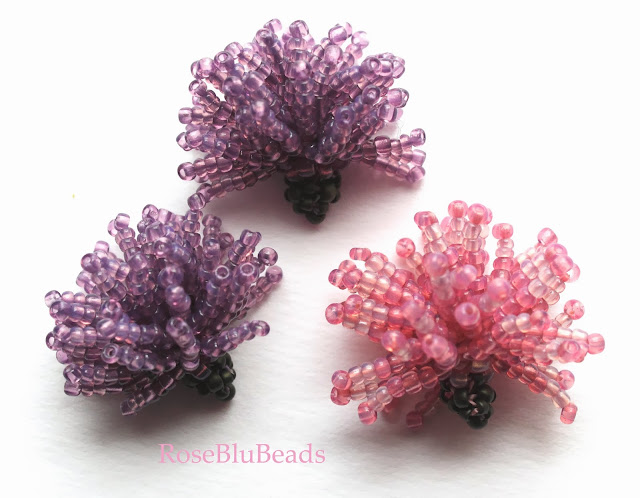 After trying a couple of different ways to blend the various components it was clear if I insisted on fringe the overall piece was going to be too busy. Instead of the fringe I decided to make some flowers. In keeping with the tassel idea I made some chives. This was a pretty simple flower to make. I mixed the size 10, 11, and 12 beads for the center and fringe, and used some Toho 11 and 15 beads for the base. I am not sure how I will work the chives in since I already have a large flower for the focal point.
Posted by Patricia at 12:22 PM No comments:

Events in the past week have left me thinking about "life, the Universe and everything." I wanted to work on something, so with my inspiration at a low point, I decided to recreate a barrette I originally made years ago. The first one had a loomed base and used round black size 11 seed beads. This time I made the base using square stitch and used a 3-cut Czech bead for the black. 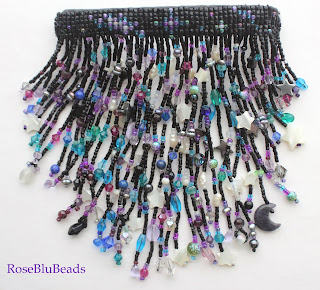 The fringe incorporates semi-precious and glass beads in the colors and shapes I associate with space. I collect small beads that can be used with seed beads and have a lot of glass stars, facetted crystals and carved stone. The vintage mother of pearl stars and freshwater pearls evoke memories of the ocean with its constructive and destructive powers. The stone beads remind me of the title of a book I read in school, Only the Earth and Sky Last Forever. The shaped Czech  and vintage German beads are meant to represent planets and asteroids. The Swarovski crystal catches the light like stars twinkling. This type of barrette has always been a popular item for me. I have made many  commissioned pieces, usually geometric designs with bugle beads and Swarovski crystals. An all white barrette was made for a friends wedding.
The nice thing about this barrette design is the simplicity. This celestial theme has no defined pattern, and is a great way to use some favorite sparkly beads. The fringe adds a nice touch to a basic barrette and takes a beginner project to a more satisfying result. I used to teach this project as well as selling the finished product. It was a hit either way.
Making this piece was a pleasant break from trying to figure out the engineering on my latest necklace. I think maybe I will try a floral theme barrette sometime soon.
Posted by Patricia at 8:19 PM No comments: 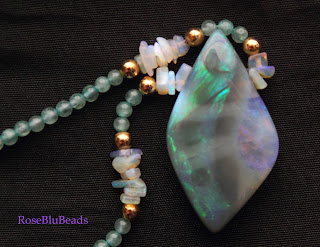 I love opals. I think it is the surprise of the color flash and the way the colors seem to dance within the stone. Over the years I have picked up many beautiful pieces of carved and shaped opal, opal beads and some Australian opal rough. Opal is the birthstone for the month of October. 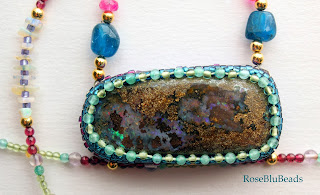 This necklace was made with a piece of boulder opal. I used other gemstones and 14 karat gold beads to accent the rich greens, blues and pinks of the color veins. The cabochon is wrapped with delica beads, 2.5mm peridot and 3mm adventurine. 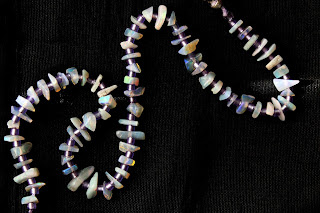 These opal chips are beautiful by themselves, and very fragile. I used silver lined purple size 11 seed beads as space beads. 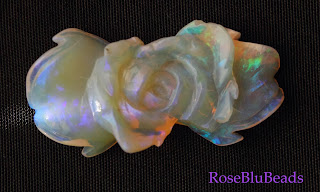 This rose was carved out of Australian opal.  I am still trying to figure out how to wrap it without breaking it. I would like to use it as a focal point since it is about an inch and a half long.